NV Energy provides electricity to 2.4 million citizens throughout Nevada and in northeastern California as well as a state tourist population exceeding 40 million annually. Among the many communities they serve are: Las Vegas, Reno-Sparks, Henderson, Elko and South Lake Tahoe. NV Energy also provides natural gas to more than 145,000 citizens in the Reno-Sparks area.

Prior to Ultimus, there was a lot of manual work which included an immense amount of printing and running memos around the company.  With over 100 steps, the process is more defined by the knowledge worker than the average step-by-step process.  NV Energy must abide by government standards and deadlines or else they may receive fines or negative case findings.

The manual legal discovery process was prone to errors, extremely time consuming and labor intensive, and offered no easy means to analyze the data. Other challenges with the process included:

Using the Ultimus BPM Suite, NV Energy created an automated legal discovery process that efficiently routes questions to legal teams.  These questions come in to the organization through outside agencies and typically have over 100 steps.  The process begins when a case is opened (such as a request filed with the state Commission for a request to raise rates) or a pending lawsuit needs an answer.  Automation also accounts for exceptions, which are incorporated into this dynamic process.

In terms of efficiency, the processing time has decreased dramatically. Employees who spent eight hours a day manually inputting data now are spending only a half hour at the start of the day and an hour at the end, gaining back nearly their entire workload.  In addition, management is no longer tied up in overseeing the input of the data and can focus on critical issues.  Overall, this process has brought NV Energy in compliance with government standards and deadlines, better reporting, and the ability to focus attention on business execution and critical needs, rather than wasting valuable time moving documents through the company manually.

Despite having more than 100 distinct steps in the process, the implementation of Ultimus’ BPM solution was smooth and efficient through the use of Ultimus Professional Services.  Success was critical, with over 300 employees touching the process on average. Once live, NV Energy saw results almost immediately and continued to improve efficiency.

The previous time-consuming, error-ridden process that was such a drain on company resources and finances has become a smooth, accurate model for legal discovery.  The Ultimus solution has enabled NV Energy to improve efficiency, accuracy and speed of their legal discovery process dramatically, resulting in a huge financial impact to their organization.

NV Energy has plans to extend Ultimus in many other operations; currently the organization holds prioritization meetings to decide which processes are most critical to the business and should therefore be automated first. On the contrary, NV Energy also has a need for the automation of less mission critical processes such as a vacation request. Ultimus is proud to have NV Energy as a customer for the past nine years and looks forward to continued success in improving their business processes.

Ultimus has automated more business processes than any other Business Process Management (BPM) vendor worldwide. Ultimus Adaptive BPM Suite has enabled companies to accelerate their performance goals at every stage of corporate growth. Ultimus’ award-winning technology seamlessly adapts to people, systems and change. Utilized by more than 2,000 customers worldwide, Ultimus provides solutions to organizations such as Chevron, Sony, Pfizer, Charles Schwab, Frito Lay, AT&T, and the Commonwealth of Massachusetts. Ultimus is headquartered in North America, and has additional offices in Latin America, Europe, Asia, the Middle East and Australia. 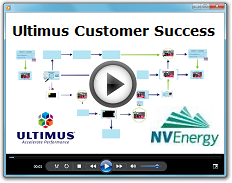